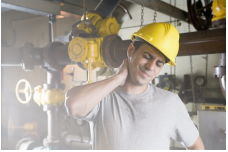 What is the
Avvo rating?

Five successful appeals in 2014 without a loss before the Full Commission of the Virginia Workers’ Compensation Commission, which handles all appeals of Deputy Commissioner Hearings:

The Virginia State Bar Rules of Professional Conduct requires all attorneys to make the following statement and disclaimer to their case results: Settlements and verdicts in all cases depend on various factors and circumstances which are unique to each case. Therefore, past results in cases are not a guarantee or prediction of similar results in future cases which Mr. Lutkenhaus may undertake.

Having MS for a long time, working was becoming very difficult for me so I applied for disability benefits. I was denied any benefits and heard that I would need to hire a lawyer. A long time friend of mine, who is a lawyer, said to call Gerald Lutkenhaus. Jerry and his staff were very knowledgeable about the entire process and the firm handled my case as true professionals. Thank you.

Update: I just got the decision letter in the mail from the ALJ, I was awarded disability benefits!! Thanks again.
– Todd B., 5.0 Review ★★★★★

Gerald was very thorough during the time I spent with him in the office discussing my claim and my concerns. He and his staff were polite and welcoming which was nice. I could definitely see myself referring others to him. Thank you for all that you have done for me.
– Monaiya G., 5.0 Review ★★★★★

I needed a workers comp lawyer for my totally incapacitated husband. I contacted Jerry. He and Rose did a great job on his case and got him a settlement for $300,000 plus lifetime medical care and a home health aide at $600 per week.
– Wanda S., 5.0 Review ★★★★★

I was hurt multiple times on the job. The last injuries I sustained was torn labrum, left bicep, and had messed up the current fusion that was done to my neck. My company only wanted to pay to have my shoulder and left bicep reattached. Now I have a chance to get the surgery to correct all the pain. Everyone was very helpful – Anne, Rose, and Mr. Lutkenhaus.
– Justin V., 5.0 Review ★★★★★

Worked for me on a case. I acquired PTSD after getting a shock finding a suicide at my apartment complex. Their lawyer tried to show I could work at the complex. Fear kept me from doing this. He helped stop their attempt to cut off my compensation.
– Crystal S., 5.0 Review ★★★★★

We will respond to your inquiry in a timely fashion. Thank you.